When Jesus was an Adolescent

Did you ever notice that there is only one passage about Jesus as an adolescent in the entire New Testament? The vast majority of each of the four Gospels is dedicated to Jesus’ public ministry, passion and resurrection. Except for a few chapters regarding Jesus’ infancy at the beginning of Matthew and Luke, Luke is the only one to report one episode in the life of the adolescent Jesus.

This began to strike me a few years ago when I got involved in youth ministry. I started off with a lot of enthusiasm and always tried to do my best, learning from the pros, and reading up on the best books on youth ministry. All the advice was excellent, based on successful experience, and definitely practical. I learned quite a bit from psychology and parenting regarding the adolescent years. I even took a two week course to study a new pedagogical approach based on modern philosophical ideas. Then, there were all kinds of youth ministry books. What about Scripture? A lot of authors base their vision of youth ministry on Scripture’s motivations for parents to educate their children, or else on the essential message of the Gospel itself: out of love for us God sent his son so that through faith we would have eternal life (cf. Jn 3:16).

However, there was still this one passage. For some reason it struck me as an untapped gold mine. It lay in the back of my mind for months on end. Do you ever feel this way about a passage of the Scriptures? I felt this way because I wanted to know what Jesus himself thought about adolescence. So why not look for it in the only passage where Jesus himself is an adolescent? Isn’t this logical? I thought so; so I dove right in! What I discovered was amazing: the richness of the passage was hardly touched upon. 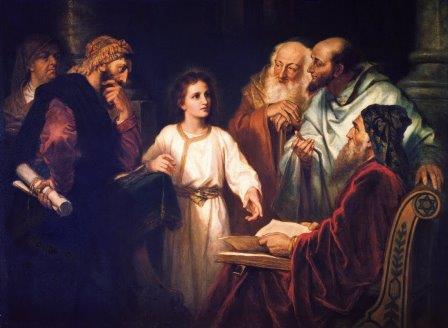 First, let me present you with the text itself. Then, I’ll bring out its richness, showing how it reveals ideas on adolescence and youth ministry. Here goes (translation by yours truly):

40 And the infant was growing and becoming strong, being filled with wisdom, and the favor of God was upon him. 41 Now his parents were going every year to Jerusalem for the feast of the Passover. 42 And when He was twelve years old, they went up according to the custom of the feast. 43 And when they had fulfilled the days, as they were returning, the child Jesus remained in Jerusalem, and his parents did not know it. 44 But having thought he was in the caravan, they went a day’s journey, and they were searching for him among those related and known. 45 And not having found him, they returned to Jerusalem, searching for him. 46 And it happened that after three days they found him in the temple sitting in the midst of the teachers, both listening to them and asking them questions. 47 And all those hearing him were being amazed at the understanding and his answers. 48 And having seen him they were astonished, and his mother said to him, “Son, why did you do this to us? Behold, your father and I were looking for you anxiously.” 49 And he said to them: “Why is it that you were looking for me? Had you then not known that I must be in the things of my Father?” 50 And they did not understand the word which he spoke to them. 51 And he went down with them and came to Nazareth, and was subject to them. And his mother was treasuring all the words in her heart. 52 And Jesus was advancing in wisdom and stature, and in favor with God and men. (Lk 2:40-52) 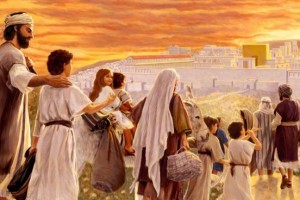 The Gift of Tradition and Culture

Verse 40 is all you need to get a summary of Jesus’ “wonder years”: his childhood in the remote town of Nazareth, the uniqueness of this little holy family, the traditions and habits of Galilean country folk, and the unique blessedness of children. Verses 41 and 42 tell us about our 12 year old’s first official pilgrimage to the Temple in Jerusalem (though he had been to the Temple as a baby), his first Passover feast, and likely the first time he witnessed the whole slaying of the lamb ritual, which he certainly saw as a poignant prelude of his own sacrifice. The passage reminds us of the deep mark that the original Passover impressed upon the Israelites. They were a culture defined by feasts meant to relive now their common past, and pilgrimages, the “great heartbeats” of Israel. These feasts and pilgrimages were meant to increase the fervor and devotion of the faithful Jews, many of which were more than willing to find a way to express their faith in God.

The boy Jesus didn’t completely break with his culture. He assumed it wholeheartedly as a milestone in the 30 or so silent years in Nazareth. But he did bring something new: this was none other than himself! He chose to be born among the Israelites, the People of God, assuming their traditions, choosing to fulfill them from within. Jesus showed that these traditions, and the entire Law, really only make sense if they help reveal his own mystery.

Likewise, Jesus confirmed for us the value of our own Christian traditions. These traditions range anywhere from popular feasts such as Christmas and Easter, to the commandments and the prayers we memorize from our youth. These are standard ways that a family, and an entire community, is able to relive the story of Christ throughout the ages, transmitting to the ensuing generation practices that define our identity as adopted sons of God and members of Christ’s body. And they can be great teaching moments, since kids are inserted into a series of traditions that make no sense to them unless they are explained. Lastly, these traditions are not meant to replace faith; rather, they’re meant as a stimulus for children and for teens to discover their deeper meaning. 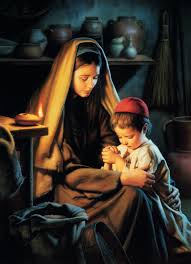 And we can see from our passage that Mary and Joseph were faithful Jews that took advantage of all the “milestones” in a young person’s life: circumcision, the presentation in the Temple, making the Passover pilgrimage every year. It’s an invitation for parents to make the best of similar milestones today, such as Baptism and First Communion, so that these experiences become significant stepping stones in the life and faith of children and teens. This way they don’t just remain stuck in the superficial celebrations promoted by society today.

For example, I designed a “saint and virtue” activity for Advent/Christmas time: Patron Saints Activity for Christmas.

And once during Lent I invited my group to a Passover experience that was designed just for teens. It was a great way to teach them in an experiential way about the meaning of the original exodus, the Last Supper of Jesus, his own death and resurrection, and the liturgy itself. You can read about that here: Preparing a Passover for Catholic Youth: Guide, Norms and Resources.

If you liked this article, please share it with others!